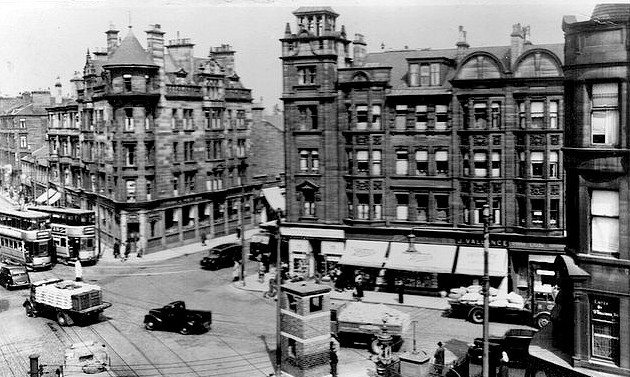 This site is about the history of the Parkhead area of Glasgow. If you have photos of Parkhead old or new and would like to have them included in this site please use the contact menu where one of the following will be in touch:

Parkhead, a village in the Barony parish of Glasgow, situated about 2 miles to the east of the city. It is principally inhabited by the humbler orders of society, consisting of handloom weavers, carters, and labourers.—The population, in 1841, amounted to 1,150. Houses 260. The Glasgow water-works, erected in 1806, and situated upon the Clyde, are in the immediate vicinity of the village.

A visitor to Lanarkshire cannot fail to be impressed that the many towns round the coal and iron field seem to be merging into one vast city, at which state, sooner or later, they are fated to arrive. Too often it is forgotten that this is exactly how Glasgow happens to be the Glasgow that we know.  Streets like Great Eastern Road serve as a reminder of historic growth. It might be termed the missing link (as a humorous Sandyhills golfer remarked of his club when three consecutive players duffed their tee-shots).

It joins Camlachie to the old world village of Parkhead, bearing the disjointed: just growed: appearance that shows traces of Glasgow’s evolutionary movement eastwards and if the Boundaries Bill can make any impression on Sassenach statesmen who know naught of the problems involved. That movement is not yet finished.

In its Alpha stages Great Eastern Roads existence is of the Dr.Jekyll and Mr. Hyde variety due to the foresight that made it an imposing main thorough fare and raised the level above the old, or Laigh road.

The old road however, as if to make up for the loss of Vinegar Hill and immortality, houses the soul satisfying liquid that the D.C.L. combine in their charity dispense for species. Bulloch, Lade and Company had these premises for many years before. When liberals used to tell fairy stories of Free Competition; to the electorate. Days and beliefs have changed hereabouts.

Camlachie Institute, which , belieing its almost 40 years in its handsome appearance, ministers to the local political and social needs, is next in the eastward scheme of the Great Eastern road. And just over the street is the well-known oil firm of Marks and Johnston, whose chief, Mr Marks passed away quite recently.

Camlachie Public School smartened up by having stone defects rectified recently, is under the genial Mr Goldie; the dominies here caused jealous flutters in religious dovecots by creating a record in Jumble Sale proceeds some time ago; the janitor, Mr Woods, is secretary of the Glasgow and West of Scotland Ex Naval Association, and a prime mover in their Widows and Children’s Christmas Treat, now an established event. A real hard worker, Mr Woods.

A little further east to the right stands the Old Toll House finely preserved and still habitable. There used to be iron posts on the pavement here to mark the limits; the horse-cars made this their terminus, in Dalrymple days when a journey to Coatbridge was regarded as we do a trip to London.

Jeanfield Cemetery, (not Janefield as is supposed and as the street in Parkhead is named) was established in 1845 and opened in August 1847. Here the rude forefathers of the hamlet sleep (this is the aptest quotation in my volume, although not too apposite) Mr James Moore, the popular Calton registrar at 90 Great Hamilton Street, has been Secretary and treasurer for many years.

To the left is Parkhead Parish Church founded in 1838 as Camlachie  Church a mission station under the Rev. Mr.Easson who died in 1842;  The Rev.James Findlay the successor ;came out; in the stirring Disruption days of 1843; the church suffered in the turmoil and closed till 1852., when still as a preaching station, it was reopened under the Rev. Alex Rattray,M A.in 1864 it was endowed as Parkhead Quoad Sacra parish Church. Mr Rattray passed away in 1904 and was succeeded in June 1905 by the Rev,D,Hunter Brodie,M.A ;B.D, the present popular minister.

Passing Van Street where Mr J,H,Kelly, a well known unionist politician, makes the articles in question, one sees to the right the counterblast to the D.C.L..Barrs Lemonade Works. This is built on the site of the Belvedere Bowling Clubs first green of which more anon. At the corner of Parkhead Cross the imposing building takes the place of a two storey one, where Gibbie Watson had a bakery .and the old  post-office was. Davie Willox to whom no one who writes of Parkhead can fail to be indebted, tells of a pawn shop ,too, at the corner of Burgher Street , kept by an irrepressible Irishman, Charlie Gallagher, and which no doubt ,had a plenitude of customers.

At the corner of Helenvale Street , where the Library now stands, was a celebrated land mark, Browns Land where in 1850, a widely known Tollcross Primitive Methodist worker, Mr Robert Kerr ,still happily with us, was born of parents engaged in the staple industry , handloom weaving. Mr Kerr who on the 10th of this month preached in Tollcross P,M Church used to work with the old Parkhead and Westmuir Economical Society. Opposite at Montgomery’s Opening ,is the site of the Old Bog Hole, where Parkhead Bowling Club, one of the first Kitty Kissing clubs in Glasgow, had their green. Belvedere, previously referred to, was an offshoot thereof. Montgomery’s Public House was the direct forerunner of the premises of Mr, Samuel Hay Gardner. The curious  whitewashed row of cottages to the right is none other than the celebrated landmark ,dear to all the old Parkhead people, The Shinty Ha. The exigencies of the road problem require its removal for very necessary road widening and removing of the built up promenade and the Shinty Ha, even as i write, is being steadily demolished.

The Tramway Department has transformed the outlook hereabouts. Helenvale Football Park, the best junior pitch in the Kingdom, and the depot premises, with all amenities, have blotted out many of the old landmarks. Parkhead Juniors of whom no words need be said in explanation ,have the site of  Hamiltons Park (so called after the farmer) for their present Helenslea Park.

Nearby was the White Horse Inn , a hostelry that lives chiefly as the scene of a terrible drunken murder, the landlord, named Anderson ,murdering his wife in a drinking fit. 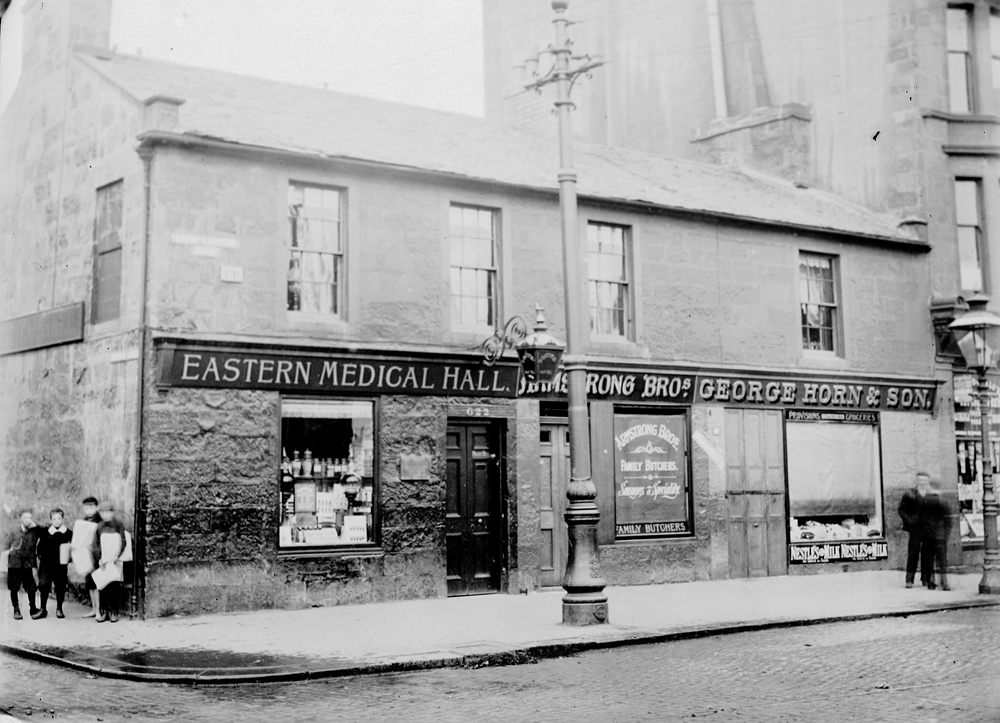 All the photographs have been taken by one of the Parkhead History Team, unless otherwise stated. We have also attempted to give credit of all our sources.

231 thoughts on “About Parkhead History”