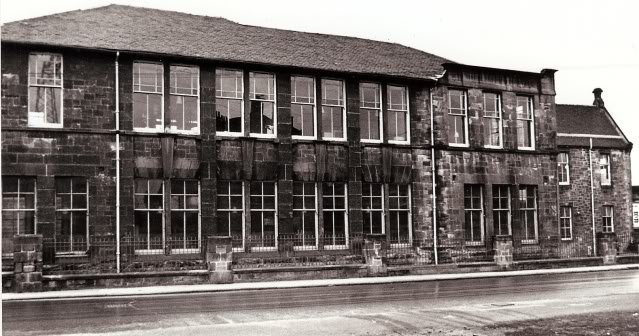 It is customary to associate the phrase Town and Gown with the cordial relation existing between the University and the civic rulers, but we think it should be applied in especial to the hearty co-operation that subsist between the Glasgow Education Authority and the Corporation, in their common aim to educate and to keep healthy and clean the children of our city.

To secure this end the Medical Officers and the Sanitary Department of the city are supported by the School Clinics.

A provision of food clothing and footwear for the school children of our citizens in necessitous circumstances is made.

In cases where mothers are compelled by force of circumstances to work out and are not able to arrange for the proper care of their children during the day, or where a widower in poor circumstances is unable to employ a competent person to look after his children the nursery class and hostel are available.

The hostel and nursery class are also open on Saturdays until 1p.m. The parents are required to pay for the children’s food, the price varying according to the circumstances.

The Education Authority has fitted up spray baths at this school with the intention that all children attending this school should take advantage of them These baths, by toning up the system, improve the physique and make the child comparatively free from, colds and lesser ailments, they also supply a practical and convincing lesson in hygiene.

The change of attitude manifest in the elementary schools during recent years is perhaps best noted in the curriculum and methods of the Infant Department, where the time devoted to the three R’s has been curtailed to make room for games, dancing, story-telling and expressional drawing,.

Speech-training and oral composition has become special features of the instruction, object lessons have disappeared in favour of nature-study, the lessons have been short-ended, and the elasticity of the time table has been increased.

Of course the first duty of the elementary school is to lay the foundations of learning as represented by the three R’s, the mastery of which is the culminating effort of the Qualifying Class where each pupil is tested as to his or her fitness to advance from purely elementary work to the more specialised work of the advanced divisions and secondary schools.

Classes for mentally defective children are carried on here too, in which the curriculum is somewhat curtailed, and each class meeting restricted in duration to prevent the pupils reaching the fatigue point of their limited brain energy.

This work is under the capable and sympathetic guidance of specially trained teachers. For these children over 12 years of age provision is also made for a certain amount of vocational training in woodwork, tailoring and shoemaking for boys, laundering and dressmaking for girls.

31st August 1939 : The school was dismissed and all the children who were registered for evacuation were asked to attend on Friday 1st September at 9.00 am. The members of staff recised instructions to parents, saw that registers were brought up to date. Pupils were dismissed. Teachers held a meeting when the full evacuation arrangements were discussed, and doubtful points settled.

4th December 1939 : School re-opened for the instruction of pupils residing in Glasgow.

5th January 1965 : School re-opened, 10 children were enrolled from the new houses in Janefield Street which were occupied during the Christmas holiday.

7th December 1965 : The senior boys were allowed to watch the football international Italy versus Scotland, at Naples, on our school tv. Reports on the game to be written later.

5th May 1966 : The 90th anniversary of the school’s opening. This occasion was taken to invite parents and friends to an open afternoon. Work was shown inclassrooms, sewing and hhandwork in Hall, anda cup of tea was provided for all in the Dinner Hall, and the meeting was closed in the Hall, with a short programme of songs by the school choir.

12th December 1966 : The Seniors Christmas Party in School Hall from 6.30 to 9.30 pm exceeded all previous efforts in entertainment. The theme of the decoration was ‘The Sea’ with murals of Neptune and undersea creatures, and find galleon ships, with two enormous fish hung from the ceiling.

24th February 1967 : The first round of the Road safety Quiz Competition was held in the Hall. Our team from PVII beat the Bluevale School team by 27 to 25 points. The teams were afterwards entertained to tea in the Dining Room.

19th May 1967 : Great distress among families at caravan site, 843 Gallowgate on receipt of notices to quit ground by 9th June.

2nd June 1967 : Fall in roll in recent weeks due not only to travellers leaving but also houses in Holywell Street being cleared for demolition.

29th August 1967 : The roll is in a state of flux, due to further demolition of Holywell Street, and the travellers moving out of the ground at 843 Gallowgate. Some have found other ground, a few have got houses, but about a dozen wagons are hanging on at 843, having no place to go.

15th January 1968 : A storm last night with hurricane force winds caused tremendous damage in and around Glasgow. After a sleepless night, a poor attendance this morning. Teachers also absent through influenza. 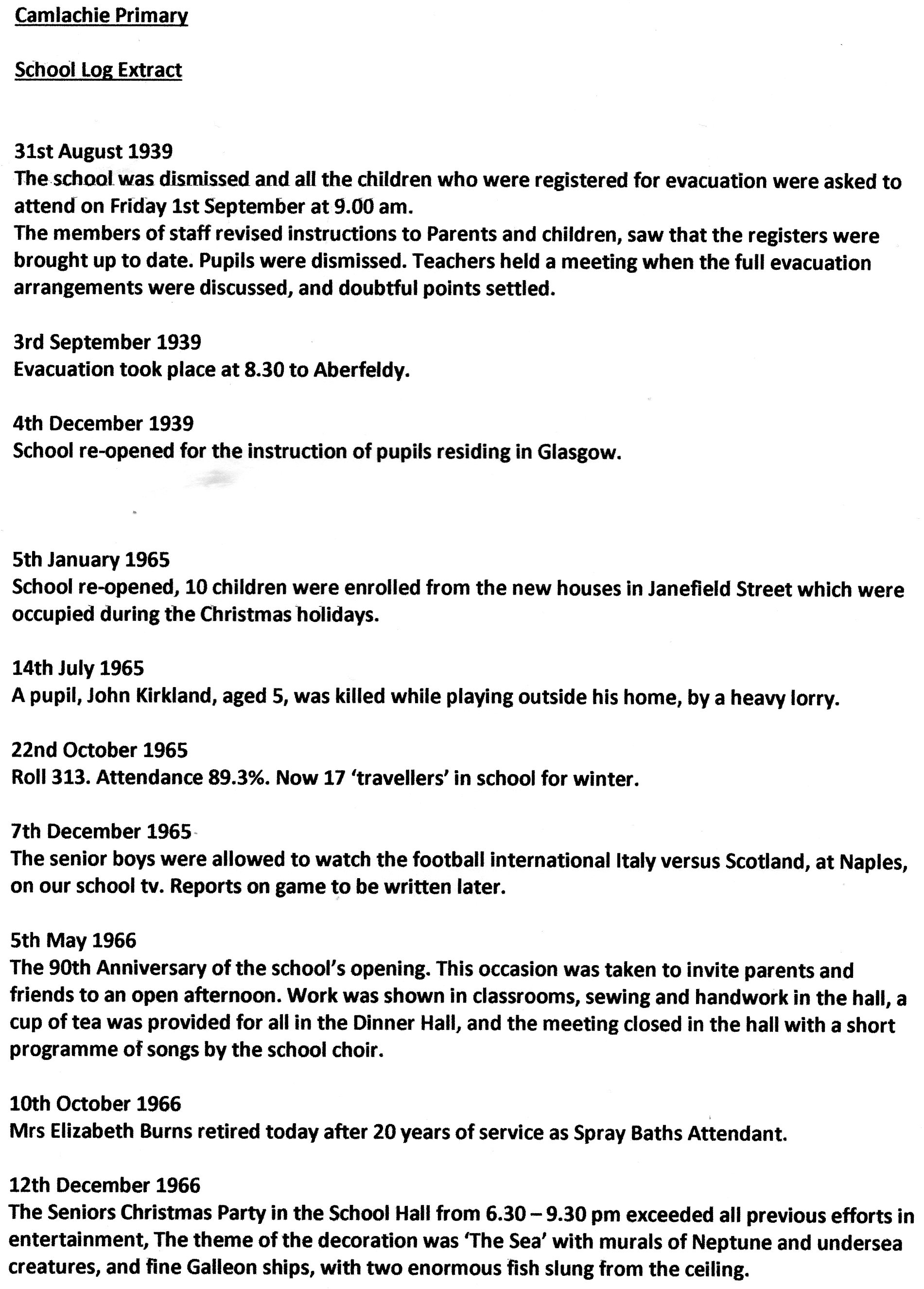 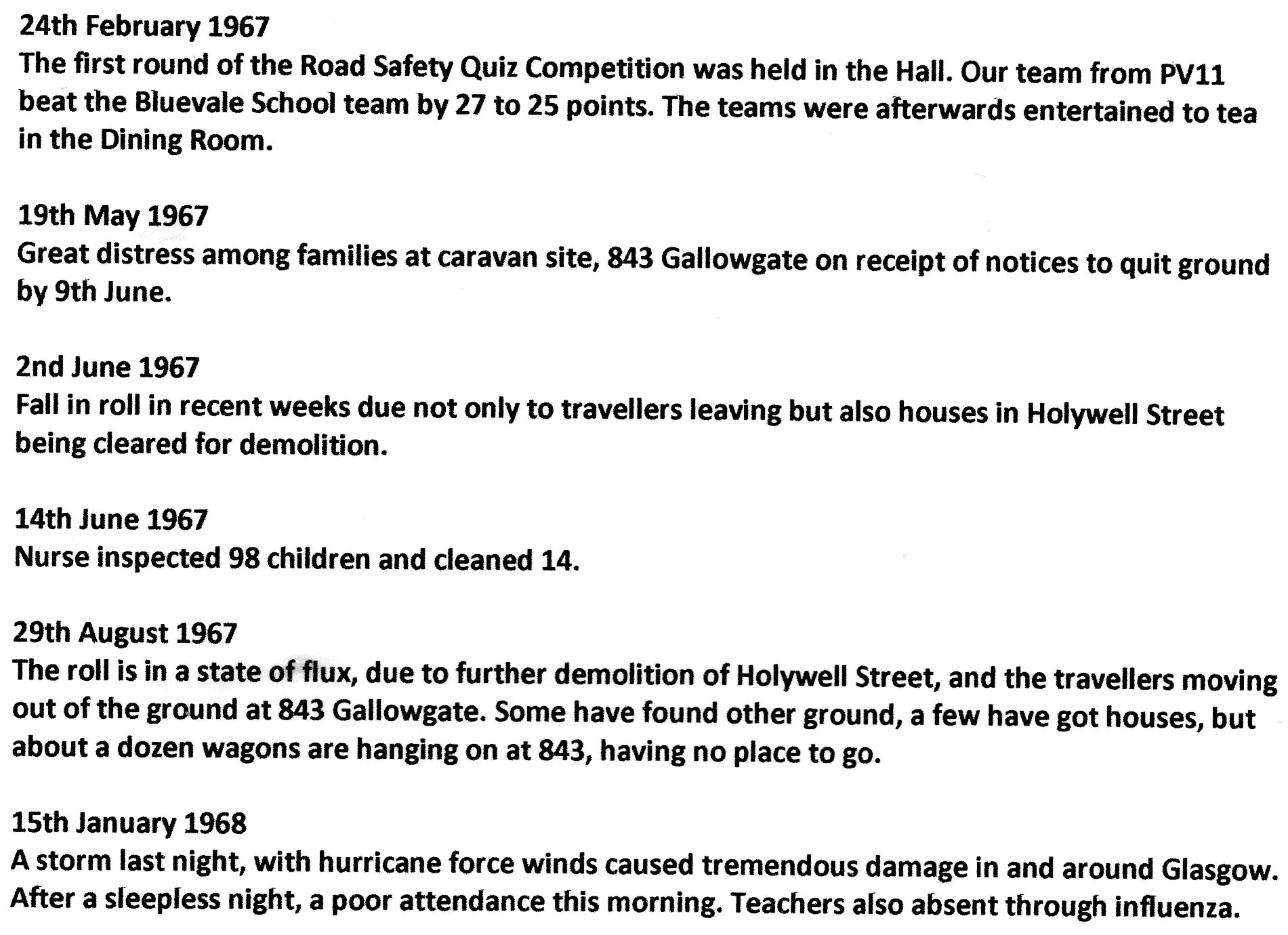