They see troop’s blankets being made, and talk to many workers about there jobs

Bridgeton cannot keep a secret! The King and Queen on Wednesday came on a Secret visit, yet hours before they arrived anticipating crowds thronged the streets around Tullis street,

From Main Street to the entrance of Templeton’s works the crowd was immense. Mounted police men had difficulty in keeping a way clear for the Royal car between 3,000 cheering folk.

It was an almost exclusively feminine crowd, with one or two self conscious teachers from John street Secondary School, the rest of the Bridgeton men were at work! But they would hear about it when they got home.

It was an orderly crowd. It was quiet until someone, bolder than the rest, raised a cheer for the home guard. The others took up the cheer. The Guardsmen sought to appear un-self conscious, and to keep their eyes in front lest they smile at Wee Maggie wI the flag.

But there was a shortage of flags. Shopkeepers unwarned perhaps, had been unable to lay in a supply, and for the most part only faded family banners were in evidence. But everyone found something to wave. I even saw various folk waving their husbands red-white-and-blue scarves of Rangers Football Club!

The John street school standard-a St Andrews  Cross was carried officially by Nettie Blair, 282 Dunn street, but her champions around helped her to wave it.

Then we waved to a wee laddie who cheekily sat on the back bumper of a private car right along Tullis street, while scores of policemen, impotently looked the other way, and smiled behind their hands.

Then the inevitable lost dog got a cheer, then a coal-man, ignoring such frivolity, only seeking to get on with his job, then the outriders, then Sir Patrick and Lady Dollan, and then the King and Queen

For a moment there was silence. One could almost touch it. An old body beside me whispered, God bless ye my dears, and the cheering burst out anew, for thirty seconds, and then Their Majesties had disappeared..

What were my impressions?

The King in naval uniform looking very boyish, But it was the Queen whom we talked about. I can still remember her charming smile, framed in a smart black hat and Persian lamb collar relieved by a string of gleaming white pearls-her husbands wedding gift.

Mrs Miller of Dalmarnock road with a baby in her arms and a child at each side told me it was the first time she had seen the King and Queen.—I had heard she was beautiful, and I had seen her picture she said, but she was lovely ,…Oh, them pearls!  I asked her why she had come to see Their Majesties?

I don’t know she replied. I just never bothered to come before. But now i will come the next time. Their Majesties are our symbol of freedom… aye even for the folk of Bridgeton.

And now A.C. Martin takes up the story. 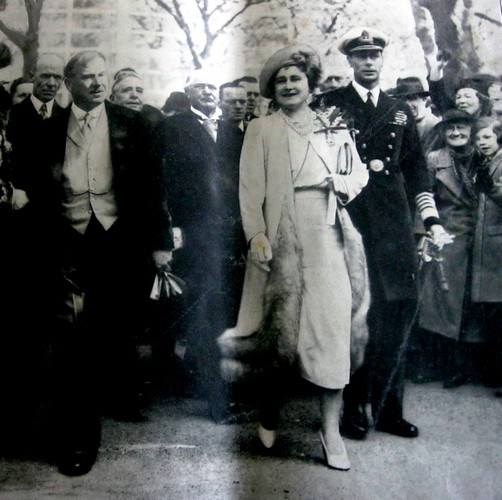 Along a lane of Templeton’s own Home Guard, mustered under the command of Messrs. Lewis, I watched Their Majesties approach the works, he writes.

While the king stopped and chatted with some of the Guards, the Queen stopped to talk with a number of the woman First-Aid workers arrayed beside the Soldier Civilians. The end of the lane was formed by two members of the firms company of Girl Guides represented by Miss McGrenachan and Miss Wilson. On the other side were representatives of the Rangers Company- Miss Ross and Miss Coan.

From there Their Majesties entered part of a building which had been built specially for their visit. There the following members of the firm were presented to them. Mr F.H.Young  Mr A. Turnbull, Mr J. P. Glass, Mr. R.A. MacLean, Mr J. Brown, Mr. J. Dickson, and Mr. I.W.Lawson

Taken from the Eastern Standard8 March 1941.