Celtic Park, which is the home of Celtic Football Club, is located in London Road, Glasgow. It is now

The new sport was almost a month old in Britain when, in March 1928, it was announced that Celtic

Park would be a venue for the new sport, the announcement coming from no less a Celtic legend than

The motorcycling correspondent of the Glasgow Herald (Herald) wrote: ‘So the Australian dirt-track

in the Antipodes. McKay and Galloway, who also are to promote meetings twice a week at the famous

Celtic Park Grounds at Parkhead. These meetings will be open and the prize money to the amount of

£200 per meeting will be forthcoming they say.’

The correspondent continued: ‘The racing will be conducted according to the regulations approved by

matter. The track is to be loosened so as to allow ‘broadsiding’, a protective fence will be erected and

electric lighting will be installed if necessary.’

was a popular venue for race events. Motorcycles, also, were not new to Celtic Park. A concrete track,

probably used for cycle racing, had existed outside an inner racing track there for a period of time, which

ended just before the First World War when it had been ripped up and replaced with a cinder version.

Harry Martin, who raced round the concrete track on his machine, establishing a track record for the

circuit. (This was the same Harry Martin, who in 1915, rode his Martin/JAP round the banked cinder

track at Paddington Recreation Ground in London, setting up one and five mile records in the process.)

The new track was ready for its opening fixture on 28 April 1928. Motor Cycling carried a two page

report of the event and the crowd which turned up appeared to be encouraging.

and the twice weekly events were reduced to one. Even this was too frequent and, given an excuse, like

The Prince of Wales’ visit to the City, meetings were cancelled. On 21 July 1928 Celtic Park staged its

The details of each meeting, where available, are given before the heat-details for each meeting which

have been gleaned from a number of contemporary sources.

unsuitable for speedway. This effectively ruled out a return of the sport to this famous venue at that time.

A bid to bring speedway back to Celtic Park in 1963 appears to have been fruitless. Trevor Redmond,

who was a partner with the Hoskins family, is reported to have sought to secure the rights to use the

stadium. Now new stands, which have squared off the stadium, cover the site of the bends and render any 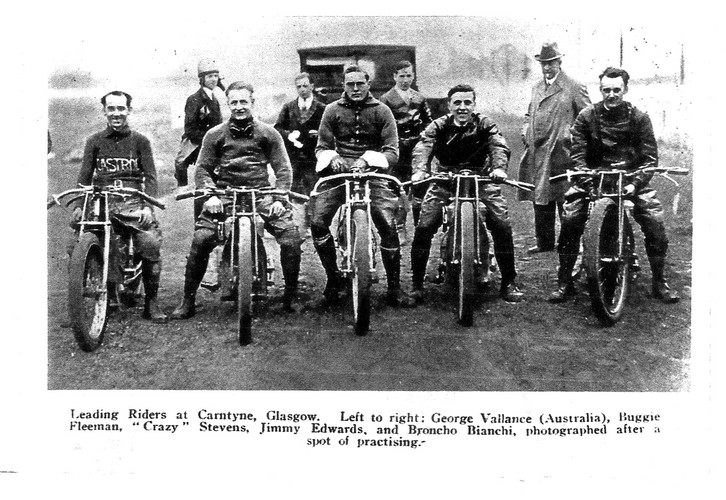