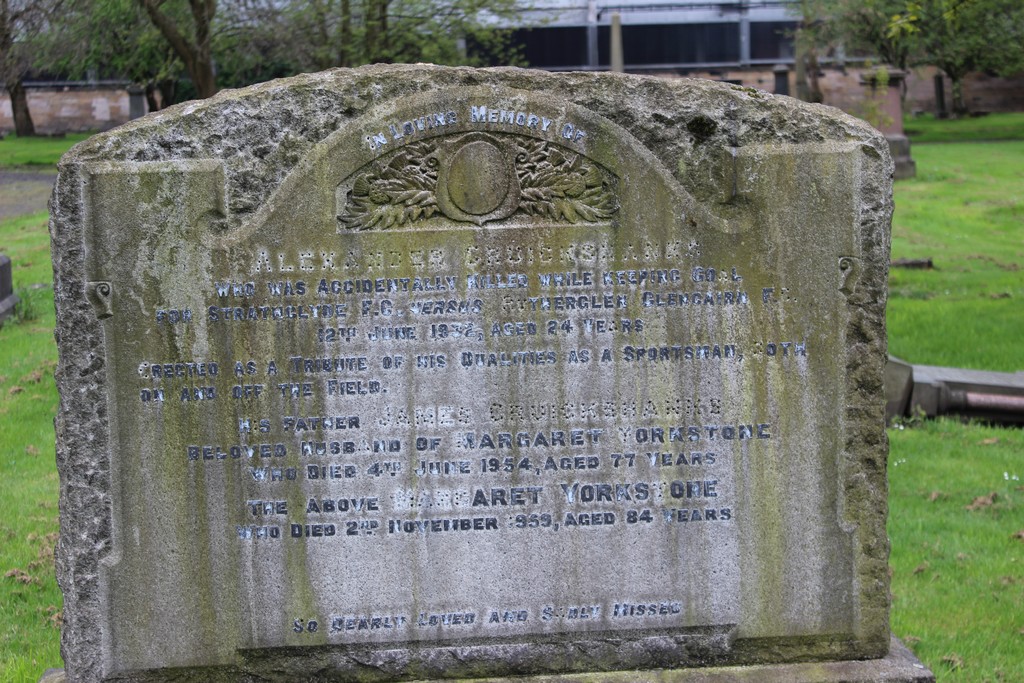 Upon that text the Rev. P Stanley Eley (vice-president, Scottish Football Referees Association) preached on Sunday at a most impressive memorial service to Alexander Cruikshanks, the late Strathclyde FC goalkeeper who died just a week previously as the result of injuries accidentally sustained while playing against Rutherglen Glencairn at Barrowfield Park. There was a great congregation, representative of the whole football world present in St Thomas’s Parish Church, Campbellfield Street, with which the tragedy victim had been closely associated, and where he began his football career.

Mr Eley opened with a moving expression of sympathy to the bereaved father and mother, to the sorrowing sisters and fiancée, to Strathclyde FC, and to all who had come under the spell of Alexander Cruikshanks’ appealing personality in his football career. Mr Eley also extended condolences to the Glencairn player who by sheer accident, and without the slightest blame, had been involved in the tragic mishap.

Observing that their departed comrade had been a splendid and respected sportsman, Mr Eley felt it a fitting tribute to his memory to plead to that great audience of youth, united in their common love of manly sport, for the highest ideals of conduct on and off the field of play.

For in football, as in the wider arena of life ‘no man liveth unto himself’. The player who broke the code of fairness exercised an influence for evil; his bad example extended to his fellow players, and not seldom to the spectators around the ropes ; so that in one short instant an individual transgression of the high ideals of honour to which Alexander Cruikshanks always gave unswerving allegiance could cause incidents and arouse passions which were a disgrace to the good name of their splendid sport.

It was sad but true that there were far too many unsavoury tactics associated with present day football. He called upon every young man there to go forth imbued with the perfect sportsmanship for which the one whom they mourned had always stood, determined to purge their grand game of every element of baseness.

But life had a greater, a wider, a more serious purpose. And in God’s mercy, there was a contagion in goodness as well as a contagion in evil. The influence of Christ – the greatest influence in world history – was that of selfless zeal for the welfare of one’s fellow men, for the joy of doing good, not in hope of personal gain but because of a burning, passionate love for suffering humanity.

In proof that ‘no man dieth to himself’ Mr. Eley traced all the suffering of the present economic crisis to the violent death eighteen years ago of a single Austrian Archduke in an obscure Balkan town – the origin of the Great War. In proof that ‘no man liveth unto himself’ he recounted the marvellous missionary work of Grenfell of Labrador.

He then made a powerful plea for football to be kept clear of the evils of gambling. ‘We are told’ he exclaimed ‘that certain clubs cannot continue without the aid of dog racing. They would be better by far to go out of existence with clean hands. The influence of bookmaking and all its satellites is degrading. It always taints where it touches.’

Pointing out that Alexander Cruikshanks had only gone into goal at first to help a club in an emergency, Mr Eley asked his hearers to make their lives like that. Let them go out their way to ‘help the side’ – to help their fellow man. That was the greatest example and teaching of Christ.