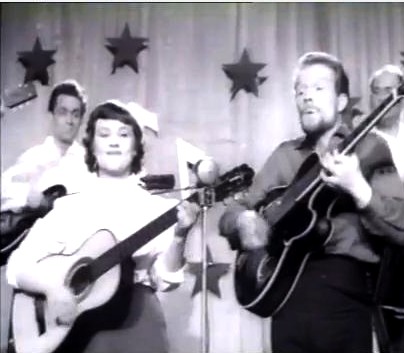 Anne Alexander Young Wilson. aka Nancy Whiskey , was a singer born  Bridgeton  March 1935, who met singer and guitarist Jimmie MacGredor at the art school she attended. He introduced her to Hillbilly and Blues music. Nancy took her stage name from a song The Calton Weavers which had a chorus , Whisky Whisky Nancy Whisky., and signed up to Topic Records in 1955 and even though she wanted to go it alone as a singer she was persuaded to join the Chas McDevitt group to record Elizabeth Cottons “Freight Train”……The record became an instant hit, getting into the top five. and earning them a gold record… In 1957 they travelled to the US where they performed on the Ed Sullivan Show.         After a second smaller hit, “Greenback Dollar”, Nancy left the group and married Bob Kelly who became part of her backing group the Teetotallers… then retiriing from the music business in the 70s…. Nancy died in February 2003 in England.  You can see Nancy singing Freight Train on You tube.