How The Famous Club Had Its Origin

From a fleeting thought, born deep love and sympathy for the poor and often starving children in the East End of Glasgow, emerged the Celtic Football Club, which today stands pre-eminent in Scottish football.

In this short series a few only a few of the outstanding stages of its history will be touched upon. I have no desire to raise any controversy, only to state what my memory forces me to believe to be facts.

It is right and proper that the credit for the birth of the club should go to Brother Walfrid a member of the Marist Order, who taught in the East End of the city. Having sad experience of the misery in that district, his heart was torn at conditions which he continually slaved to alleviate.

The wonderful enthusiasm among Glasgow Irishmen which greeted the victory of the Hibernians in the Scottish Cup Final of 1887, when they defeated Dumbarton at Hampden by two goals to one, gave him an idea, which he almost immediately dismissed as ridiculous.

But it kept recurring in his mind, and finally he broached it to several gentlemen who were zealous members of the St Vincent de Paul Society in St. Mary’s parish.

To Feed the Starving Bairns

Look what the Hibernians have done. Why shouldn’t we start an Irish club in Glasgow, and make enough money to feed these starving children, among whom I work, was his plea and so a start was made.

Many players were sounded but the response was not encouraging, as most of them were chary of identifying themselves with an unknown organisation.  Just when the position appeared to be hopeless a suggestion was made that Tom Maley should be approached.

He was at that time playing for Third Lanark- then the 3rd L.R.V. It was immediately acted upon, and a deputation proceeded to Cathcart to interview the young athlete and his father on the subject.

The difficulty was at once surmounted as a hearty welcome was extended, and besides enlisting one whose personality was at once a guarantee of integrity and earnest endeavour, the assistance of his younger brother Willie, just beginning to show marked ability in the game was obtained.

A Visit That Is History

What that visit meant to the Celtic Club, to football in Scotland, aye and elsewhere, I leave my readers to judge, as besides getting the inspiration to go ahead the services were enrolled of one who was later to add lustre to the club’s name on the playing field and athletic arena as a legislator, and as a controller of its destiny.

I refer to Mr.William Maley, the secretary and manager, who has never been of office from the club’s inception. Soon the ground at Dalmarnock Street was knocked into shape, what time eager young fellows were busily training in the hope of being included in the team.

Numerous practice games were held and a constitution was drawn up. Today it makes interesting reading. Eleven gentlemen formed the first committee, and the original members paid an annual subscription of 5 shillings. A new member had to hand over an additional 2s 6d on joining, one black ball in four debarred him.

It was laid down that the club, officially born in December, 1887, had as its principal object to maintain the fund for providing dinners  to poor children at school in the three East End parishes of Glasgow.

The first official season of the club 1888-89 opened with an Exhibition cup tie, in which Celts were included in the second class competition, Abercorn, Dumbarton Athletic, , and Partick Thistle were defeated, but Celtic had to bow the knee to Cowlairs, specially strengthened for the occasion, in the final,  losing 2-0.

Then came the Snow “Final” with 3rd L.R.V. at Hampden both teams protesting before the game which the Warriors won by 3-0, repeating their victory in the replay by 2-1.

By this time Celtic had commanded considerable interest, and their defeat in the cup was hailed with delight by those who resented, or perhaps I ought to say envied, their meteoric rise.

These lads in the white shirts with green collars and cuffs and red Celtic cross on a green pocket (their original dress) found themselves up against it, I can tell, but they had a slight reward in winning the North Eastern Cup in their first season, beating Cowlairs by 6-1 at Barrowfield.

This is only the first part of the Celtic history written by Alex, S. Maley, in the Eastern Standard 18th May 1933, To read more of this series they can be found in The Glasgow Room in the Mitchell Library  (Eastern Standard 1933) 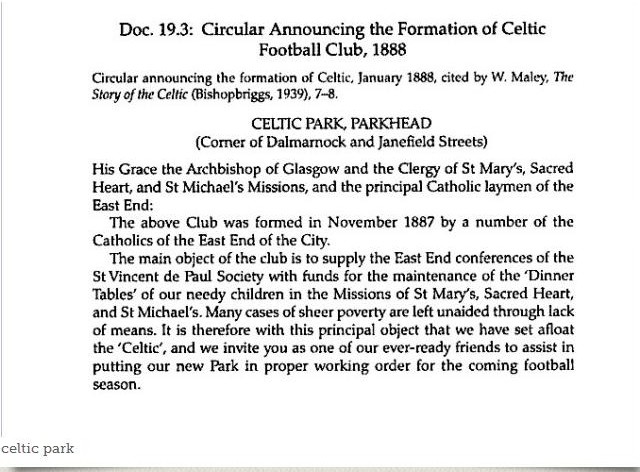 And not just Football at Celtic Park

With the Celts at far away Aberdeen on Saturday, the field is clear for the great Boxing Carnival at Celtic Park in aid of the fund for Limbless Heroes.

All the greatest British exponents of the manly art, renowned figures in the ring, will display their prowess with the gloves.

A mere glance down the list billed to appear will at once prompt the reader to attend the Carnival.

Not often in Glasgow have we the chance of seeing Jimmy Wilde, Tracy Lee, Bomb Wells, Dan Flynn, Wally Ross, Dan McGoldrick, Sid Shields, Pat Breslin, Johnny Lafferty, and Joe Hendry.  Any two of these pitted against opponents of their own class would draw a crowded house anywhere.  But in addition to the great professionals named, the cream of Scotland’s amateur talent will also appear.

The sterner battles will be relieved occasionally by bouts between Skinner and Basten, the one eyed boxers.

Mr. Eugene Corri will act as referee and Mr. W. White as timekeeper, Sir Archibald McInnes Shaw will take the chair.  The band if the Royal Scots Fusiliers will perform.

It is hoped that the Glasgow public will turn out in their thousands to assist the very deserving charity for which the Carnival has been organised. 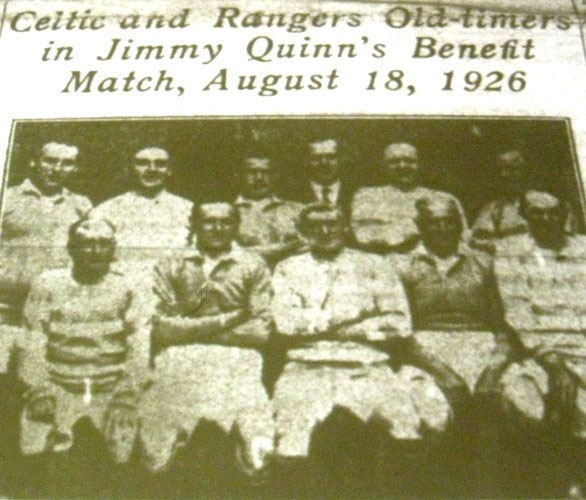 Jimmy Quinn sighned for Celtic aged 22 by Willie Maley from junior club Smithston Albion in 1900,[1] Quinn took several seasons to make his mark, playing at outside-left then inside-left before being moved to centre.

He received this benefit match in 1926, in which Celtic played against a Scottish League team, ending in a 3–3 draw 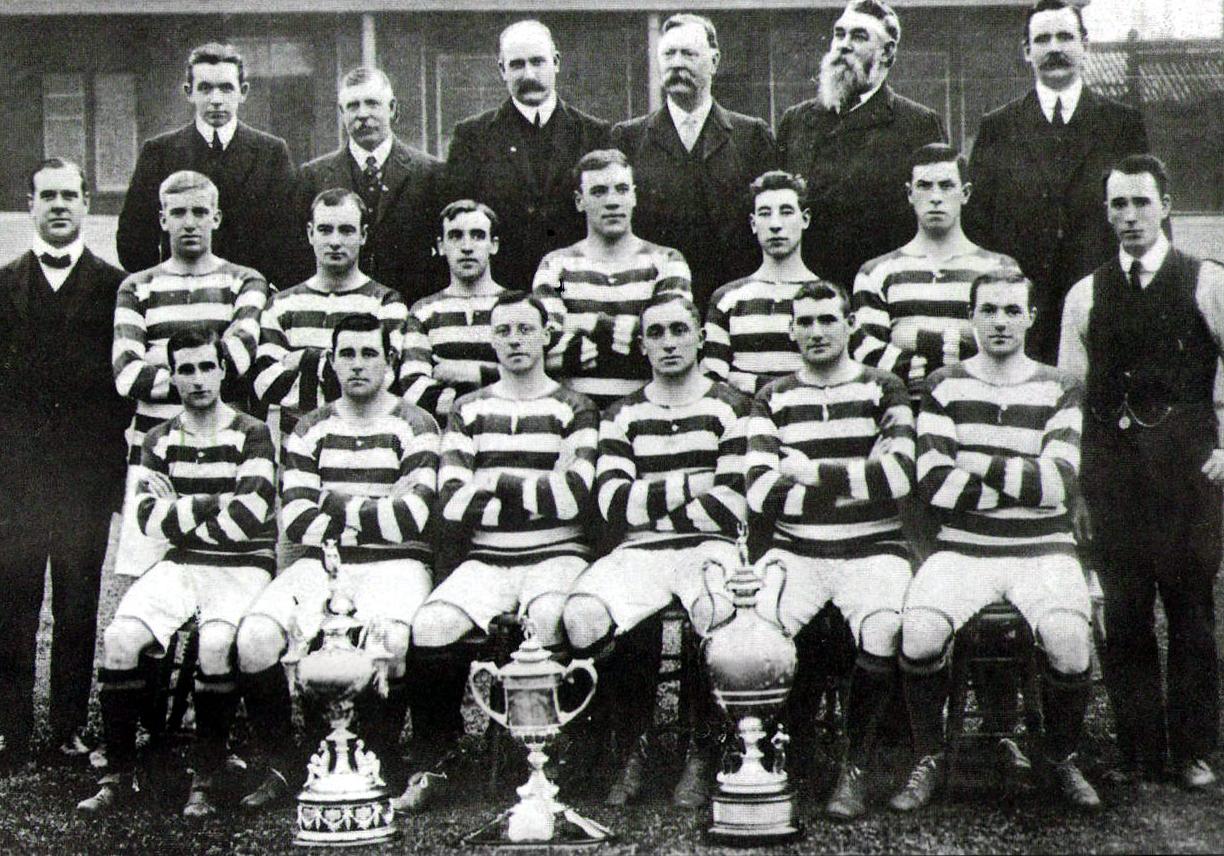 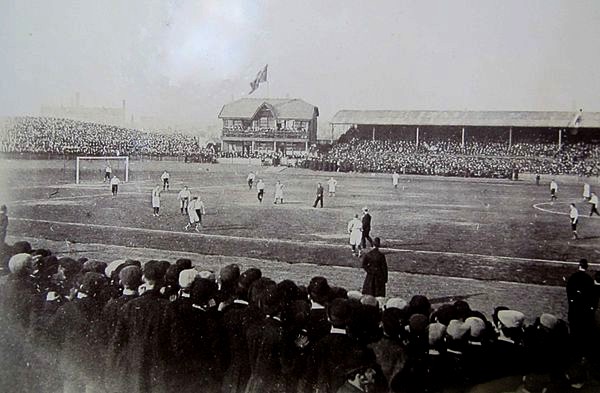