THROUGH THE YEARS AT PARKHEAD 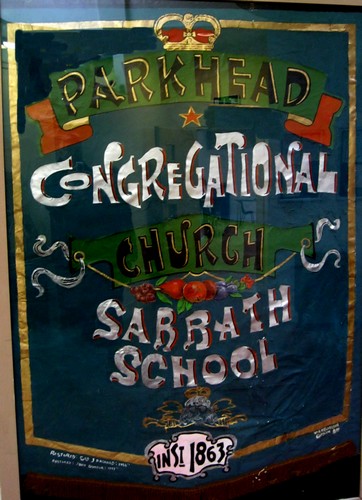 On Sunday first the Parkhead Congregational Sunday school is celebrating the seventieth anniversary of its inception. Much water has passed beneath the bridge since the first Sunday of March, 1863, when some twenty scholars and three teachers met for the first time in the old Beaming Room in Shinty Ha, and there inaugurated a work which has gone on uninterruptedly for seventy years. Many changes have occurred in the interval. At that time Parkhead was a village consisting largely of weavers shops and separated from the city by long stretches of green fields. Its population would number about five thousand. The nearest churches were at Tollcross on one side and Whitevale on the other.

A large proportion of the younger element ran wild on Sundays, and it was felt by a few carnest souls that something should be done to provide them with a new and helpful interest. The Parkhead Advertiser of January, 1893, in the course of an obituary article dealing with Mr. Alexander. S Barr, whose death had taken place the previous month, states, Fully thirty years ago, impressed as he then was with the apparent neglected condition, especially of the young and rising generation, along with a few friends connected with The Congregational Church, meeting then in Dovehill, resolved to commence Sabbath School work in Parkhead. So on the first Sabbath of March 1863, the Sabbath School opened.

For the first year or two the School was in charge of Mr Murray, with Mr Barr, as secretary. After a short period, however , Mr Murray retired, and Mr Barr became superintendent. Every one knew Mr Barr, and Sandy Barrs Sunday School was famous far beyond the bounds of Parkhead, He was a man possessing strong and forceful personality, and it was stamped deep on the School over which he presided, The early records throw an interesting sidelight on the social activities of the school ,and life as it was lived in Parkhead in those early days. Among other events referred to is the first excursion organised by the Sunday school, from which we gather that the people of Parkhead took their pleasures somewhat strenuously in the year of grace 1868.

On the 1st of September of that year the children and their parents mustered at Parkhead Cross at 6 o’clock in the morning, and headed by the Lord Clyde Band, marched to the Broomielaw, and boarded the steamer Lady Brisbane for Garelochhead where a wonderful day was spent. On  arriving back the young trippers again marched to Parkhead where an immense crowd of mothers, brothers, sisters, and others were waiting to welcome them back, and the greetings were as warm as if the young voyageurs had been away for a year beyond the sea. We wonder how the modern boy and girl would regard such a day’s programme.

For almost thirty years Mr Barr laboured wholeheartedly, and laid the foundation upon which succeeding generations have built. The Beaming Room eventually became too small, and for a considerable time the school met in the Old Academy in New Road, Duke Street.

Round about fifty years ago the present church in Westmuir Street was built and there the scholars found a home. For the past twenty years the school has met in the Church Hall, Ravel Row, and notwithstanding its threescore and ten years remains as virile and active as ever, and continues to be influenced for good in the district.

A succession of splendid men devoted themselves to carrying on the fine traditions. Mention must be made of Mr.R.H. Henderson, who succeeded Mr Barr as superintendent, and Mr. Robert Bolton, who took the place vacated by Mr Henderson, also of Mr. Andrew Robertson, who carried out the duties of secretary for many years. These gentlemen have gone to their reward, but they have left fragrant memories behind.

Special meetings have been arranged to celebrate the seventieth anniversary of the school, particulars of which may be found in our advertising columns.