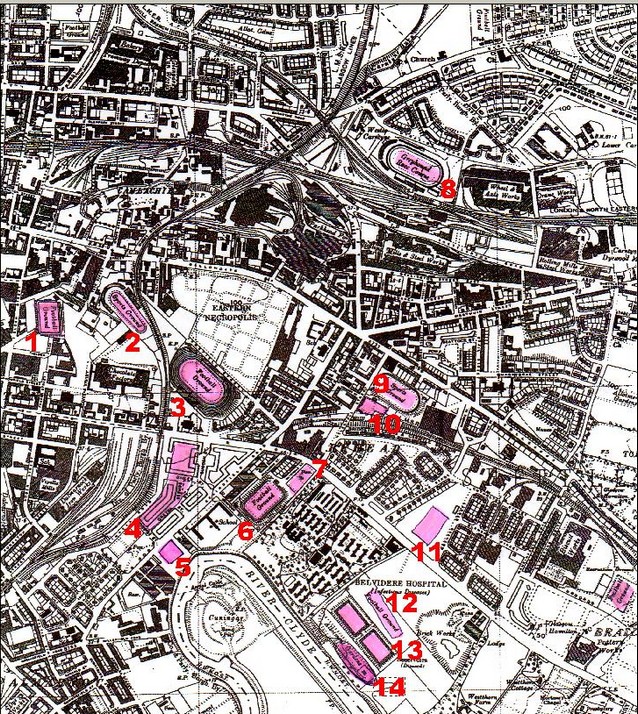 1- Bridgeton Waverley Football Club : Barrowfield Park was situated at Camlachie. The club was founded by former pupils of Queen Mary Street School in Bridgeton, but disbanded during World War 1. They later reformed, becoming a junior club in 1924, playing their games at Shawfield before moving to Barrowfield Park. Their stay here was quite short lived as the ground became the subject of a compulsory purchase by Glasgow Corporation who needed the land for the Barrowfield housing scheme, which was built around that time. The club secured a piece of ground on London Road close to Belvidere Hospital and named it New Barrowfield Park

6- Strathclyde Juniors Football Ground : Known as Springfield Park, it opened in 1919 and remained in use until 1965 at Silverdale Street. It was the home of Strathclyde Juniors, who were founded in 1888, and who previously played at Beechwood Park at Dalmarnock until August 1901, and from there they moved to New Beechwood Park, before finally settling at Springfield Park. The team became defunct in 1963.

8- Carntyne Dog Track : Opened in October 1927, principally as a greyhound race track, it was in its history to be used for many other sports and pastimes. It was laid out on the site of a farm and former flapping track, it became the venue for the prestigious Scottish Greyhound Derby, and continued dog racing until May 1972. On 6th August 1928 around 35,000 fans watched  a boxing match at Carntyne between Tommy Milligan and Frank Moody. Many greyhound stadiums also accommodated speedway events and Carntyne was no exception, with meetings commencing in 1928. Between 1960 and 1962 Bridgeton Waverley football team played their home fixtures at the stadium. In the early 1960’s bold efforts were made at Carntyne to generate revenue by a variety of means. In October 1962 a casino was opened within the stadium and six months later the ‘Grandstand Bar’ was added. To lure customers Greenshield Stamps were on offer in May 1963, whilst a golf driving range was also tried that summer with 40 balls for 2/6d. In June 1966 even stock car racing came to Carntyne to try and make the venue sustainable. Sadly almost nothing remains, with only the remnants of the Duke Street turnstiles still extant.

11- Parkhead Juniors Football Ground:Helenslea. The club was founded in 1880 and was at one time the oldest club in the Scottish Junior League, and certainly the oldest in Parkhead. Their original Helenslea Ground was sited at Beattock Street and Powfoot Street, and they won the Scottish Junior Cup on five occasions ; 1899, 1903, 1915, 1920 and 1924. The New Helenslea Ground was located at Methven Street with turnstiles in Cuthelton Street. It was also the venue for a boxing bout in July 1931 (see boxing tab) 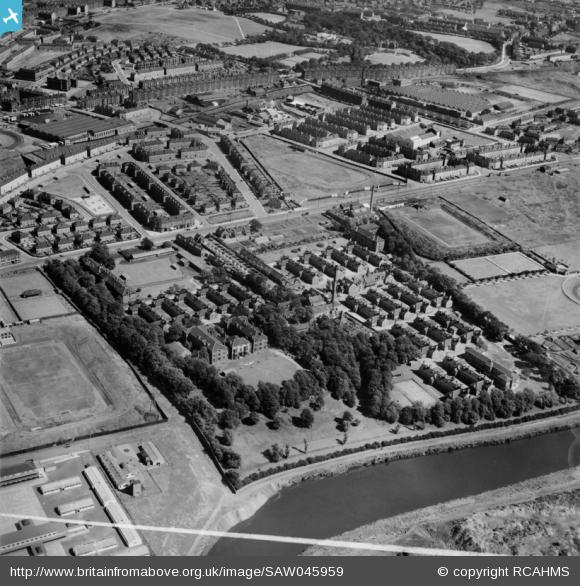 This arial view shows Strathclyde F.C. football ground on the left, with Barrowfield ground (now  Celtic training ground) on the right and Helenslea home of Parkhead F.C  across London Road 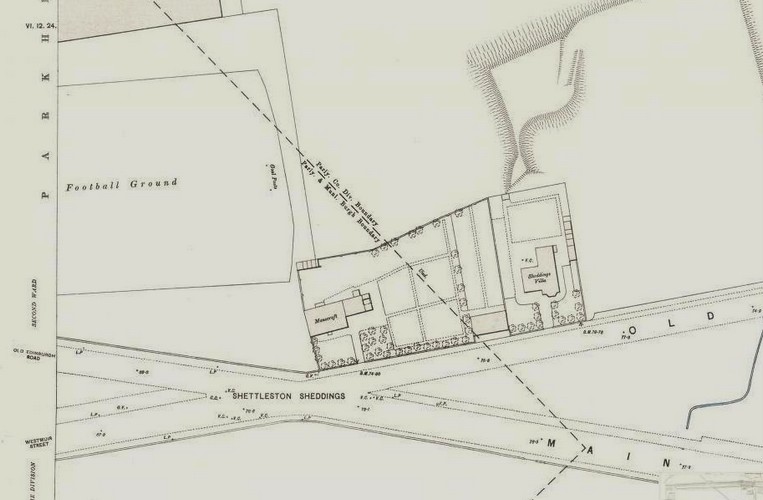